Being English, I’m somewhat leary of popular Pastors writing books that seem to be going over

ground so well-trodden that visitors have to be re-routed to avoid erosion – it seems a little too commercially driven, and unnecessary. When said book is a weeny little thing about such a monumental and wide issue as the whether and how of reading the Bible, I dial down my 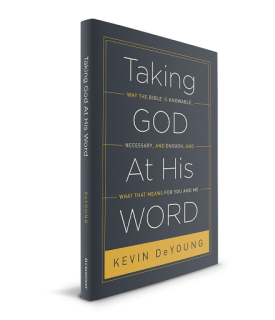 expectations. The subtitle of, ‘Why the bible is knowable, necessary, and enough, and what that means for you and me’ almost made me laugh: all that in 113 pages of large-fonted, wide-spaced, small-paged writing?!

Except that I’ve experienced Kevin DeYoung’s brain through his preaching, and it’s a very big brain, directly connected to what seems to be an extremely pastoral heart. And…well…at the T4G conference where I bought it, it was on special offer, and I managed to pick up a free ‘Scripture Cannot Be Broken’ t-shirt.

And that’s how my natural skepticism and concerns about commercial opportunism were overrode largely by a big discount and a free t-shirt.

DeYoung divides his book clearly and logically, with four of the eight chapters devoted to the Bible being ‘Enough’, ‘Clear’, ‘Final’ and ‘Necessary’.

“The doctrine of the clarity of Scripture is not a wild assertion that the meaning of every verse in the Bible will be patently obvious to everyone. Rather, the perspicuity of Scripture upholds the notion that ordinary people using ordinary ;means can accurately understand enough of what must be known, believed, and observed for them to be faithful Christians.”

DeYoung then carefully but quickly defends that against mystical, Catholic and pluralistic objections as well as demonstrating – just as crucially – why we should care about the whole issue. I love the way he takes apart the ‘Six blind men and an elephant’ story that is often patronisingly used as proof that truth and meaning is up to us as readers:

“For starters, the whole story is told from the vantage point of someone who clearly knows that he elephant is an elephant…[and]…What if the elephant talks?…would the six blind men be considered humble for ignoring his word?”

The Bible claims truth, clarity and objectivity for itself so if you want to deny all that, you are left with a limp and useless God of your own making, not the creator of the universe who saves his people from their sins.

The other area that I found particularly interesting, because I knew least about it, was in exploring Jesus’ view of the Bible, most particularly how he submitted to it and used it as the clincher in a number of arguments. “Jesus may have seen himself as the focal point of Scripture, but never as a judge of it. The only Jesus who stands above Scripture is the Jesus of our own invention”, which led the author to say almost in closing,

“The unity of Scripture also means we should be rid, once and for all, of this ‘red letter’ nonsense, as if the words of Jesus are the really important verses in Scripture and carry more authority and are somehow more directly divine than other verses…”

Not that you need to throw out your red-letter Bibles, but…y’know…be careful with them…

DeYoung helpfully closes with an Appendix about the 30 books he has found most helpful on this topic (yes, he reads a lot), and has graded them Beginner, Intermediate and Advanced for us normal folks to pick from accordingly.

This is a book for anyone, but more particularly for everyone, and left me feeling not merely more intellectually bolstered in my faith, but encouraged and enthusiastic. The writing is clear, he doesn’t waste time, but gives you easy-to-read, solid material to reflect on. And next time DeYoung writes something that seems a little commercially driven and unnecessary, I’ll know better.

Especially if it comes with a free t-shirt.