As an alternative to, “I’m repossessing the love”, or wilfully ignoring people, it’s clearly a good thing, but I don’t know that it goes much further. Which isn’t a criticism of anyone who’s written that phrase in a Facebook comments field – after all, my ability to meaningfully encourage my 578 Facebook “friends” is extremely limited given I have very little idea about what’s really going on in the lives of the many of them.

So if “I’m sending you love” falls short (at least on its own), what does it really mean to “encourage one another daily” (Hebrews 3:13)? 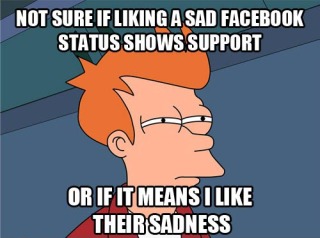 First, the limitations of a Facebook comment illustrates the same point I tried to make in the post on Accountability, which is that the only way to be faithful to God in “doing community” is to have meaningful relationships with people so that our encouragements are specifically tailored to them. That, in fact, is how God does much of his work among us, by using us jars of clay in our relationships with people to take God to people and people to God in ways that are pertinent to people’s situations.

If you saw someone walking up and down with a sandwich board having the words, “Be encouraged in God” written on it, how encouraged would you be? You might think “OK, I will”, or “OK, I guess I should”, and make a brief effort of will to feel differently to how you feel. And then it would pass. If 100 people marched up and down in front of you with that same board, the pressure to make yourself feel better would go up a notch, and would be equally transient.

encourage = “give support, confidence, or hope to (someone) / persuade (someone) to do or continue to do something by giving support and advice” [Oxford English Dictionary]

As you would expect, there are many examples of and instructions for this in the Bible, which give us some principles about what Christian encouragement can look like:

For example, in 1 Samuel 23:16-17 we are told that, “Jonathan went to David at Horesh and helped him to find strength in God. ‘Don’t’ be afraid,’ he said. ‘My father Saul will not lay a hand on you. You will be king over Israel, and I will be second to you. Even my father Saul knows this’”.

Two things struck me about those verses: a.) Jonathan clearly and self-consciously relegates his natural position in light of the words of God, and b.) unambiguously points to God as the source of the strength needed by his friend David. Saul was trying to kill David and the time and David may not have been feeling God’s promises to him. When someone feels the absence of God in their life, it may be tempting to encourage them to look to us (“I’ll be there for you”), or to find untapped reserves of strength in themselves (“You can do this”), rather than do what Jonathan does, and point them right back to God.

Jonathan was effectively doing just that, when he used the words of God to sustain his friend. It’s also the apostle Paul’s explicit desire when he tells the Thessalonians to “encourage one another with these [Scriptural] words” (1 Thess 4:18).

When Paul is telling Titus what kind of man should be an Elder in the church, he gave the following requirement: “He must hold firmly to the trustworthy message as it has been taught, so that he can encourage others by sound doctrine and refute those who oppose it” (Titus 1:9). Again, it is the truths of Scripture themselves that are to be the encouragement to God’s people.

3.) Connect with the local church

“Let us not give up meeting together, as some are in the habit of doing, but let us encourage one another –and all the more as you see the Day approaching” (Hebrews 10:25).

Showing up might not be half the battle, but it’s at least an essential recon mission in the communal fight against falling away from God – a fight in which we are side by side in the infantry, not lone snipers…

4.) Shepherding people away from (the smell of) sin

“See to it, brothers, that none of you has a sinful, unbelieving heart that turns away from the living God. But encourage one another daily, as long as it is called Today, so that none of you may be hardened by sins deceitfulness.” (Hebrews 3:12-13)

Here is a key area where the difference between personal engagement and the ‘sandwich-board’ approach of blanket, distant communication is most important. I can say to someone, “Don’t sin”, “Trust God”, “Persevere” etc. But if that person doesn’t think I understand them, or if I haven’t taken the time to really understand where they’re at, those words just come across as pompous and self-righteous, like I regard myself as already doing those things and they just need to shape up and be more like me.

When I encourage someone to persevere in resisting a temptation for…let’s say…drunkenness, it carries a lot more weight when they know that I know how keenly they feel the temptation. It may help them also when they know that although I rarely drink, I have struggled with an addiction to food most of my life that has manifested itself regularly in the sin of greed. What does NOT qualify as an encouragement, is a bland restatement of what they already know (if they already know it!), that drunkenness is a sin.

“encourage the young men to be self- controlled” (Titus 2:6)

I can do that in part by reminding people how such behaviour glorifies and pleases God, by helping to see how sharing the gospel with non-believers is powerfully reinforced by a life that is consistent with their words. I can give them examples of other people (like the apostle Paul’s protege Timothy) who showed self-control, and by praising God for how they themselves may have shown self-control.

Sure, we can “send” people love, but it’s far better to find out what kind they need and take it to them. And for most of us, for most of our friends, most of the time, that’s just what we should be doing to fulfil the community mandate of encouragement.