Because God says so.
Christian Community, that is.

I tried to write this post a couple of days ago but got myself sidetracked by notions of obligation and the word “mandate” and wrote this instead. As Christians we all want to please our Heavenly Father, right? Well, “doing” community is one thing that He tells us to  do with our lives.

“…so in Christ we who are many form one body, and each member belongs to all the others.” (Romans 12:5, NIV)
I’ve put that verse in here just to reinforce the overall Biblical mandate for Christian community, but as I do so I’m struck by the force of the word “belongs”. “Members one of another”, as the more literal ESV puts it, is even stronger. The point is the intrinsic indivisibility of the body of Christ, which makes division in practice, or lack of togetherness, no less tragic than the ripping apart of limbs. When we have a better grasp of the depth of meaning to just this one verse, most everything else Jesus and Paul say on the subject will fall easily and naturally into place. 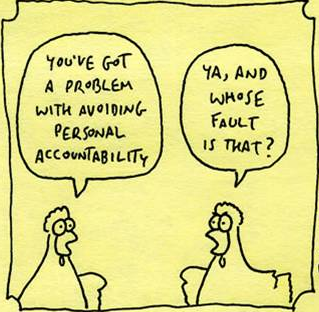 There’s no definitive guide for exactly what “community” will look like in practice, but there is plenty in Scripture that tells us it must happen. I’m going to take a brief look (based on the sermon I preached last month), at eight aspects of that required community living that we see in the Bible.

We’ll kick off with accountability.
This may be the least popular element of Christian community – it reeks of Big Brotherism, of judgemental attitudes, of prying, of being a busybody, bossing people about, snooping, tattle-tales and whole bunch else that we should avoid. In avoiding the notion of being accountable to other believers, many will say something, “I’m only accountable to God”. When such attitudes are held with Bible texts in mind, the resort will sometimes be to 1 Corinthians 2:15 where Paul says, “The spiritual man makes judgements about all things, but he himself is not subject to any man’s judgement: ‘For who has known the mind of the Lord that he may instruct him?’ But we have the mind of Christ.”. It’s even used as a double-edged sword to say on the one hand, YOU can’t tell me what I can and can’t do, and on the other hand, that no-one can even speculate on what GOD thinks is OK for me to do or not do.
This of course flies in the face of everything else Scripture says which leads us to one of the basic rules of how to interpret Scripture: take note of context, especially when one piece of Scripture seems at face value to be contradicting another part. Usually we don’t need to read more than a few verses or a couple of chapters either side of the cherry-picked verse in order to make sense of it, and this is no exception. In 1 Corinthians 2 Paul is encouraging the believers that they do not need to worry about what non-Christians say about God, or about worldly wisdom that ignores God. After all, those who do not know God themselves cannot hope to understand what God says. It is God’s standards we are being held to, not man’s.
In 1 Corinthians 5 (just two chapters later!) Paul expressly commands that unrepentantly immoral Church members must be put out of the church. Clearly a judgement has been made there that one of God’s objective, unchanging commands has been broken, and a further judgement has been made that the Church member doing so refuses to repent of that sin, and must be removed for their sake and for the sake of the Church itself.
Ultimately therefore it’s clear that as members of one body we are all accountable to each other, and that we are all expected to be able to discern from the Bible what is sin and what is not sin.
But the mandate for mutual accountability goes beyond merely calling each other out on gross immorality: “confess your sins to each other and pray for each other so that you may be healed” (James 5:16). James doesn’t say, “Some of you like to share, and wear your heart on your sleeve – feel free to confess to each other if you’re like that”. Rather, the command is for all of us, regardless of whether or not that comes easily or naturally to us. It’s not to say, of course, that we must all write down a list of everything we do wrong and tell every fellow-member about it. If that were the case then we’d spend most of our lives doing it. But rather, confession and prayer for those who confess to us, should be a regular and established part of doing life together.
Practically speaking, how do we do that? We could of course approach any brother or sister in Christ, confess something to them and ask for prayer – nothing wrong with that. We could do it during worship services on Sundays, although that perhaps makes our corporate gathering less of a corporate gathering.  It’s also not very conducive to openness, honesty, and mutual vulnerability.

So here are a three suggestions:

In our Growth Groups (small groups for church members) here at First Baptist in Grand Cayman, we aim to commit to each other in a way that makes trust, vulnerability and accountability, if not easy then certainly easiER! Getting to know a small number of people very well, investing in each others lives in the good times and in the bad, makes it natural that when one person is struggling through hardship or sin, that the others gather round in love to challenge and encourage.

“Wounds from a friend can be trusted, but an enemy multiplies kisses.” (Proverbs 27:6)

Are our friends really friends, or simply people whose company we find amusing and inoffensive? Do we make friends with people largely because they entertain us, or are we also looking for people in whose company we find ourselves pointed to Christ? Friends are a big influence on each of us, so it makes sense that we should be more intentional about making them, whereas most of us tend to talk about friendships as if they are things that happen to us.

“Do not envy wicked men, do not desire their company” (Proverbs 24:1)
“He who walks with the wise grows wise, but a companion of fools suffers harm.” (Proverbs 13:20)

Some of the people we already know are probably quite capable and willing to be good accountability partners for us, it’s just that our relationship up to this point has existed purely at the level of the superficial – whether that’s superficial emotions, hobbies, the weather…whatever. This happens easily and naturally – maybe we’ve bonded over a shared hobby, or from being at the same life stage (e.g. just had kids/’kids’ gone to college), working at the same place, so that conversation tends to revolve largely around that thing we first had in common. As Christians we’re called on to go a lot further than that, because the most fundamental connection between any two Christians is always the fact that they are both children of God.

Do we seek out those more mature than us in the faith to help us?

Are we actively looking for people with whom we can be team-mates in the faith? (as we heard tell in last week’s ‘Authentic Manhood’ class at FBC)
And are we searching for and offering help to those who look as if they could use some Christian friendship?

The funny thing is, most of us gravitate to superficial friendships because they seem the most immediately satisfying and least like hard work. And of course there’s nothing wrong with having a whole bunch of superficial acquaintances – we’re not called to be the blood brother of everyone we meet.

But it’s also true that some of the loneliest people in the world have the most acquaintances, and true friendship – which will always have accountability at its core – is not only a Biblical mandate, but also a more rewarding, challenging, peace-filled way of living your life with God.