Singing’s not my thing. Sure, I joined the school choir when I was 12 and had a lot of fun hanging out with a bunch of other kids and getting to skip lessons to go to rehearsals – what’s not to like about that? We did a concert or two which was great fun, including something about a railwayman, but then in the space of about 5 minutes one day, a hormone kick ruined my voicebox forever, and I’ve been slumming it in the atonal section ever since.

Perhaps that’s the biggest reason I’m not “into” singing. Most of us are most interested in doing the things we’re best at, and tend to avoid those things we think we do badly. That principle has kept me away from a number of things such as artwork, ballet, long distance…well, any distance running, medicine, accountancy…the list is too long to contemplate. For the most part that’s not a problem, because there’s no actual need for me to do any of those things. 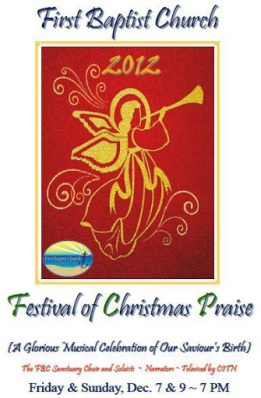 As a Christian though, it’s not the same with singing. The Old Testament has a number of references to people appointed to “do” the singing. However, though there are many choirs and designated singers in the Bible, singing is not primarily for choirs it’s for all the gathered people of God. That reference to all living thing in creation praising God is an image worth meditating on. I’ve sung ‘Abide with Me’ with 90,000 people at a football game, and that didn’t do anything for me as probably >95% of them didn’t believe what they were singing. And I’ve sung in a small church with 50 folks gripped with gratitude to their Saviour and it’s been mind-blowing. The idea of being part of a choir-without-number is wonderful.

Singing is one of the ways God has given us to worship him. Not just gifted people like our wonderful choir here at First Baptist Church of Grand Cayman, who have carol concerts lined up for tonight and Sunday. But all of us: the tenors, sopranos et al down to the atonals like me. Paul the Apostle shows us that when God’s people sing as a community it’s a sign of our unity in Christ – it’s one of those ways in which the barrier between Jews and Gentiles is shown to have been removed, whereby we are all one in Christ Jesus.

There’s a responsiveness to music and an emotional and physical catharsis about singing that makes it uniquely suitable for expressing deep gratitude and admiration. God wired us up like that quite deliberately, so that even people like me who’d quite happily never sing anything in normal circumstances, can be gripped with joy at being with God’s people singing his praises.

Singing will probably never be my ‘thing’. But praising God in song and thereby giving him honour while feeling a greater sense of unity with my brothers and sisters in Christ and a greater depth of gratitude, wonder and awe at God – that’s where it’s at.