The Christian Institute reported today that “Gloucestershire County Council has removed all references to God in its council ‘prayer’”, after 3 of 63 councillors objected to prayer following the government writing to all councils to confirm that they were allowed to pray at meetings.

This is not, in the grand scheme of things, a big deal. On one hand, every time any person/institution/group seeks to have less of God rather than more, it’s upsetting because they are moving further away from the whole point of their existence. On the other hand, the Bible’s not real big on forcing areligious governmental bodies into religious observances of any kind.

What was more interesting to me was something else the report said: 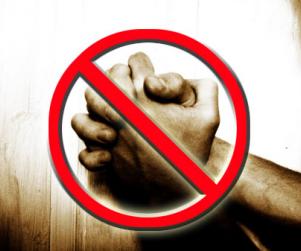 “The council leader claims the form of words, which still ends with “Amen”, “does the trick without being related to God”.
The new prayer says: “May we find the wisdom to carry out our duties, the humanity to listen to all, the courage to do what is right and the generosity to treat each other with respect. Amen”.”

So really it’s a noble vision statement with an antiquated word at the end, likely to be understood by none of the councillors.

But back up a second: “does the trick without being related to God”.
This is a prayer we’re talking about, right?

Clearly, the leader of the council is not a Christian but what’s the “trick” he’s talking about?

Seems to me that public life has descended to the level of regarding success as causing the least offence possible to the greatest number. Sort of a toothless utilitarianism…or rather a utility-less utilitarianism. It acknowledges that many people want to “do” something, but so long as even a tiny minority of people don’t want that thing done, the goal of responsible leaders is to get as close to doing it as is possible without, in fact, doing it.

The “trick” therefore, is to do nothing whatsoever while giving as much appearance of it as possible. To avoid offending those who don’t like the mention of God by not mentioning God.
And to avoid those who feel compelled to mention God at council meetings by using a religious word at the end of a sentence that doesn’t address or mention God in any way.

For whom does this non-prayer do “the trick”? Nominal Christian councillors nervous at the lack of all religious appearance to their meetings? A nominal sub-set of the wider public who have similar concerns and fear the consequences of rampant secularisation?

I think if I was a councillor I’d object to this non-prayer far more than to the absence of prayer. Let’s have a vision statement: cool. Let’s say it out loud: even cooler. But please, let’s not be rank hypocrites and pretend we’re doing something we’re not.

The apostle James says this in his letter in the Bible to Christians: “If any of you lacks wisdom, he should ask God, who gives generously to all without finding fault, and it will be given him” (James 1:5). I suggest any Christians in Gloucestershire County Council remain seated while others stand to take this God-free pledge, and pray to their Almighty Father to grant them the wisdom they need to govern.

Otherwise the only “trick” that’s been done is to remove God from everyone’s minds while pretending He’s still there.